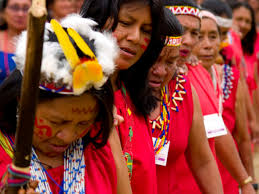 Despite their efforts to claim environmental justice and human rights, rural and indigenous women find themselves excluded from decision-making and consultation processes on policies and developments that will affect their communities’ rights, lives and well-being. The barriers to women’s participation are embedded in traditional gender stereotypes that restrict women to household roles, as well as the institutionalised marginalisation of indigenous peoples in Latin America.

Rural and indigenous women are among the most vulnerable groups in Latin America, experiencing high levels of poverty, lack of formal education, and scarce access to key public services including health. In addition to social exclusion, women from affected communities live and survive in geographically remote areas, further limiting their possibilities to fully engage with decision-making on policies linked to the exploitation and expropriation of their lands.

For many rural and indigenous women, overcoming these barriers implies exposing themselves to further risks that include gender-based violence from state and private actors, as well as from within their communities (see Protection). In turn, the isolation of women victims of violence contributes to the normalisation of their invisibility and their stereotype as victims.

How can we ensure women from rural and indigenous communities are heard in policies linked to the exploitation of their land, resources and territories? How can women’s empowerment lead to positive social change in the context of resource extraction and exploitation? What would a women’s movement towards sustainable development look like? LAMMP’s vision is a world where women have an equal voice and opportunity to participate in decisions that will shape their lives and future. To achieve this, we seek to provide women from rural and indigenous communities with the necessary equipment and knowledge to strengthen their own movement and continue their campaigns for justice and sustainability.

LAMMP recognises that violence against rural and indigenous women in the context of the extractive sector is strongly connected with their poverty and with deeply rooted gender and ethnic inequalities throughout Latin America. Consequently, at the heart of its programmes, LAMMP seeks to provide women from affected rural and indigenous communities with necessary tools and resources to overcome these multiple barriers to their participation, thus enabling their transformation from victims to WHRDs.

Through training and workshops in for example, information technology and social media, public speaking, policy and development strategies, LAMMP aims to strengthen women’s capacity for leadership. In addition, by weaving alliances and networks among women from affected communities at local, national and regional levels, LAMMP’s projects aim to mobilise a strong and empowered women’s movement demanding for social justice and corporate accountability in the context of resource extraction and exploitation.

2. Forums and “encuentros” to facilitate experience sharing and networking between WHRDs from isolated and remote areas

3. Enhancing the organisational capacity of women’s groups in fundraising and advocacy

4. Supporting WHRDs to publicise their work widely on websites and through social media;