To mark the 12th of October, the day on which the arrival of Christopher Colombus in America in 1492 is commemorated, LAMMP denounces the silent ethnocide of the Yukpa indigenous people in the state of Zulia, Venezuela.

In Sierra de Perijá (in western Venezuela bordering on Colombia) there is increasing alarm at the killings of indigenous people. These killings are known as ‘silent homicides’ because they are not investigated by the judicial system. Six indigenous Yukpa people in the Perijá region have been murdered and seven wounded so far this year. The degree of unpunished violence is so high that the area is commonly known as the “lawless land”. With 73,000 indigenous natives, Zulia has the highest aboriginal population in Venezuela. Many stakeholders are active in the Sierra de Perijá range, each with his own agenda, ranging from deforestation, agribusiness and mining to drug trafficking. Its shared border with Colombia means that the region is also subjected to attacks by the paramilitary, hired killers and soldiers from the Fuerza Armada Revolucionaria Colombiana (FARC). However, the mining operations in Guasare and Paso Diablo are the most serious and latent threat facing the Sierra de Perijá ‘s indigenous peoples and its biodiversity.

The Yukpa people disagree with the Venezuelan government.

Chief Sabino Romero has expressed his disagreement with the Venezuelan governmentś plans to expand mining in the Sierra. According to maps drawn up by Corpozulia, the agency responsible for development in Zulia, the government has granted concessions to Russian mining companies to exploit coltan and uranium in Perijá. Sociedad Homo et Natura, a non-profit organisation dedicated to supporting the struggles of the indigenous peoples living in the Sierra de Perijá, maintains that “the extractive plans that follow the large corporations’ geo-economic strategy for Latin America is the fundamental reason why President Chávez’s government persists in a policy of allowing only small plots of land for the indigenous Bari and Yukpa people, and its refusal to acknowledge their rights to live as different peoples in a single wide expanse of territory.” In fact only 2.4% of indigenous lands2 have been given exclusively to the indigenous people who played a leading role in the Bolivarian revolution. These extractive plans, which will be accompanied by the construction of four important highways and five military bases, have so far been rejected by the Yukpa leaders, even though the real purpose is euphemistically disguised as “Bases for the Security of Citizens” within indigenous communities known as “Pilot Centres”3.

The recent economic plan presented by President Hugo Chávez in his candidacy manifesto, explicitly states exploitation of natural resources in Venezuela as his goal. His strategy is in direct opposition to the indigenous peoples’ cosmic vision which precludes cattle-raising and mining on their ancestral lands. President Chávez’s plan calls for “strengthening a state company for the exploitation of mining resources, forming mixed companies in which the Bolivarian Republic of Venezuela will hold a majority share of 55%”1.

The continuing coal exploitation in the Sierra de Perijá, mainly in the basins of the rivers Socuy, Maché and Cachirí not only threatens the indigenous communities in the region. It also poses a significant danger for the Sierra’s ecosystem, since deterioration of that ecosystem impacts the water sources that feed one of Venezuela’s largest cities: Maracaibo and the entire west shore of the Lake Maracaibo. The loss of cloud forests, which are chopped down to make way for coal mining, are irretrievable losses due to the fragility of these ecosystems. The Sierra de Perijá has the highest number of plant and animal species per surface unit among all the world’s ecosystems.

In the struggle to recover their lands, which has been ongoing since 1982, the Yukpa people complain that they are cornered by cattlemen, hired killers, guerrilla forces and the military. They are also threatened by hunger and curable diseases. At present Chief Sabino Romero’s family claims that it receives constant threats from farmers and the military merely for trying to safeguard their ancestral territory from mining development. It is worth remembering that in 2008 Sabino’s father, the Yukpa shaman José Manuel Romero aged 102, was beaten to death. A video of grandfather José Manuel, in which he complained about the threats he received was never investigated by the authorities.

During a clash between Yukpa families in 2009, pregnant Mireya Romero and Ever García, both close relatives of Sabino Romero, were killed. Five Yukpa were wounded, among them children and Sabino himself. The police identified the Yukpas Olegario Romero and Sabino Romero, and the Wayüu Alexander Fernandez as being responsible for the murders. Sabino and Alexander were sent to prison hundreds of kilometres from their homes. Sabino’s wife, sister and daughters described how during their visits to see him at the military prison where he was being held the soldiers aimed guns at them, and forced them to undress. Once the women were naked the soldiers would grope them, laughing and making fun of them. On one occasion they tried to rape Guillermina Romero, Sabino’s eldest daughter.

The two Yukpa prisoners were released after seventeen months, thanks to the indefatigable fight put up by Professor Lusbi Portillo from the University of Zulia, the legal defence team for the indigenous people, Sociedad Homo et Natura together with other human rights organisations, and the hunger strike by José María Korta, a Jesuit priest aged 81. During an indigenous trial that followed later, the Yukpa Olegario Romero admitted to having commited the crimes in 2009.

Persecution by the cattle ranchers

Sociedad Homo et Natura believe that President Hugo Chávez intensifies the tension between indigenous people and cattle ranchers by publicly supporting the Yukpa, without any economic reward for the cattle ranchers. In the organisation’s opinion the conflict intensified at the end of 2011, when the Instituto Nacional de Tierras (INTI) [the National Land Institute] manipulated the demarcation maps and increased the actual territory claimed by the Yukpa by 90%, thus unleashing a war between cattle ranchers and the indigenous people in Perijá. Collective hatred is strengthened daily by the media through its criminalisation of indigenous people.

During 2012 the Yukpa Wilfrido Romero y Lorenzo Romero, Leonel Romero, Dario García and the Yukpa youths José Luis Fernández and Alexander Fernández were all killed on the Las Flores plot of land in Perijá. Alexander had previously been detained with the Yukpa chief Sabino [Romero] during the clashes arising from the struggle for indigenous lands.

Since mid-September 2012, Sabino Romero and Carmen Fernández have been filing complaints about the presence of armed men in the vicinity of their communities. Carmen Fernández has identified the alleged killers of two of her sons (Alejandro Fernández and José Luis Fernández) among those armed men. A third son was so badly wounded in the stomach that he needs weekly medical treatment. During a personal interview with LAMMP (July 2012), Carmen confirmed that when she filed a complaint about this incident at the offices of the Cuerpo de Inteligencia Científica Policial Criminalístico (CICPC) [the police body handling scientific and criminal intelligence], she was told that if she “continued to pester them, they would kill her other two sons and drink their blood”.

Fiona Watson from Survival International stresses that “the situation of the Yukpa is extremely serious. For decades they have endured violence by the powerful cattle ranchers of Perijá. Although the Venezuelan Constitution of 1999 attributes to the indigenous peoples the collective titles to their lands, the State has done little to guarantee those rights. The militarisation of the area has had a disastrous impact on the indigenous way of life. Yukpa leaders have been subjected to political persecution and silenced with imprisonment.”

The Yukpa are an indigenous people who moved 2,500 years ago from the Amazon to the Sierra de Perijá in Venezuela and Colombia. Their first contact with European civilisation took place in 1528 with the expeditions by the German Ambrosio Alfinger. Capuchin missionaries founded the village of Macuaes (present-day Machiques) in 1722. Between 1908 and 1935 the dictator Juan Vicente Gómez sacrificed vast areas of indigenous forests and rivers to transnational oil companies like Shell. Industrial livestock farming tripled in the 1940s in Zulia thanks to Nestlé. Although economic development benefitted the farming industry, a large invasion of farmers, peasants and plot owners grabbed 90% of Zulia’s indigenous territory between 1956 and 1975. Parallel to this, the demographic explosion that started in the 1950s, when the Venezuelan population doubled every three years, forced the indigenous people to retreat into inhospitable and remote areas high up in the Sierra. The town of Machiques, originally founded on Yukpa land, became a mecca for cattle ranching which offered the indigenous inhabitants servitude as an alternative to being kicked off their lands. Thus in exchange for a roof over their head, food and alms, indigenous women went into domestic service while the men became drivers and labourers. Other indigenous inhabitants sought refuge in Zulia’s capital Maracaibo, where to this day they wander like beggars through the streets.

Their current population is around 15,000 in Venezuela and 7,000 in Colombia.

LAMMP is a non-profit organisation registered with the Charity Commission and headquartered in London. http://lammp.org

Our mission is to support Latin American rural and indigenous women and girls affected by mining projects by inspiring them to take action, create opportunities and unleash their potential to transform themselves into actors that lead social change. 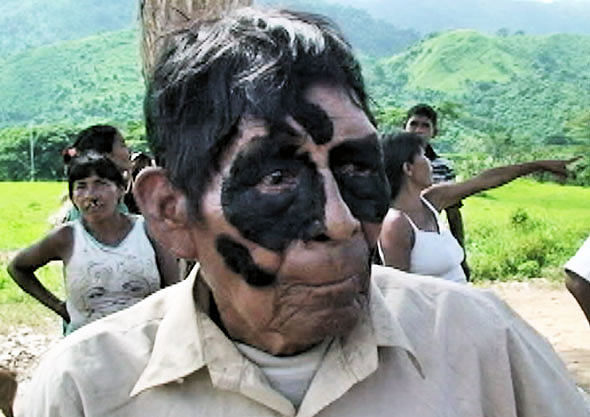