A meeting of the indigenous women’s group ONAMIAP (Indigenous Andean, Amazonian and Afro-Peruvian Women of Peru), held in early February, 2013, called for the authorities not to neglect their obligations and to guarantee, by complying with the law of a democratic state, the collective rights of the Cañaris community. The Cañaris are an indigenous Quechua people living in the Lambayque region of northwest Peru. A mainly agricultural area, it is the seat of pre-Incan Moche and Chimú cultures and therefore also an area of national historical interest.

That the indigenous Quechua people exist is a recognised fact in Peru. According to a 2007 census of the Cañaris district 11,743 (64%) inhabitants spoke Quechua and only 7475 (36%) spoke Spanish. In October 1956 a resolution issued by the Ministry of Labour and Indigenous Affairs acknowledged the ”legal existence and juridical person of the indigenous communities of San Juan de Cañaris.” The resolution further states that any administrative measure ”which might affect said community must be subject to the procedure of prior consent”.

The Cañaris are traditionally an agricultural people. As the ONAMIAP women point out, the community has the right to a sustainable development based on activities such as livestock and organic farming which they perform in harmony with Nature. This is essential to ensure that their forests, ecosystems, water sources and ancestral culture remain untouched and unpolluted. But all of this is now being endangered by the Canadian mining company Candente Copper, whose three mining projects – Cañaris Norte, Cañaris Sur and Quebrada Verde – threaten the area’s water sources, cloud forests and 33,000 hectares of agricultural land.

According to Article 7 of Peru’s Law 26505 (Law of Private Investment in the Development of Economic Activities in Lands of the National Territory and of Native and Peasant Communities), the use of lands for mining or hydrocarbon operations requires the prior consent of the owner. Article 11 of the same law states that in order to ”dispose of, tax, lease or exercise any other activity on the communal lands of the hills and forests a two-thirds majority vote in favour by all members of the community will be required for agreement by the General Assembly.”

It is worth noting that the Quechua people have title deeds to their lands. 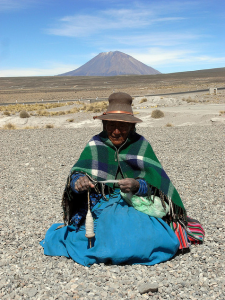 The resistence of the Cañaris to Candente Copper’s mining projects on their lands follows a depressingly familiar pattern. In July 2012 bloody clashes between police and protesters blocking the road to one of the sites produced at least one fatality. And although a recent peaceful protest by the community was without major incident, tension between the Cañaris and the mining company remains high. Candente Copper claims that 700 local people gave it the green light in 2012, but local officials say the community rejected the mine in a referendum. The mining company acknowledges on its website that it has problems with the Cañaris, but (predictably) puts those problems down to the agitation of anti-mining activists and others of similar ilk from outside the community.

The women of ONAMIAP will not be deterred from speaking out. Their 8-point open letter to the public makes it clear that they will continue to defend the rights of the Cañaris to protect their ancestral lands and their livelihoods from the incursion of mining companies. With notorious mining cases like Monterrico-Majas, Conga and Espinar still raw in the minds of many indigenous and campesino communities, the women’s call for the constitutional law regarding the rights of those to be upheld is one the authorities would do well not to dismiss lightly.