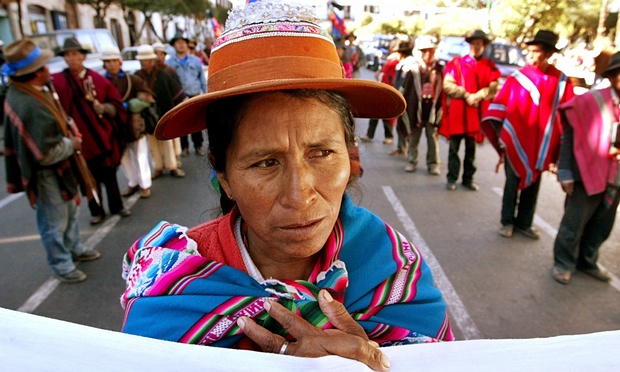 An indigenous woman in Bolivia where moves to frack are meeting with increasing concern among civil society. Photograph: Jose Miguel Gomez/Reuters, 2015

As climate change already bears its print across the world, LAMMP is concerned that those who have contributed the least to this devastating phenomenon are suffering the most from its greatest impacts. Climate change is a source of global concern, yet it is the rural and indigenous communities worldwide who are disproportionately affected from the rise of temperatures, floods and droughts. LAMMP is joining these communities in urging world leaders for climate friendly solutions, to mitigate and prevent environmental damage.

Between 30 November and 11 December, the twenty-first session of the Conference of the Parties (COP21) is convening in Paris where world leaders will negotiate a new International Climate Agreement to keep the average global temperature rise below 2 degrees. However, without recognition of the human rights implications of and corporate accountability for climate change, there can be no concrete action that would truly benefit indigenous and rural peoples.

Across Latin America, despite the looming threats of global warming, investments for mining as well as oil and gas drilling, continue to flow without the consultation of local populations. These activities are among the most harmful to the planet, and have significant impacts on land-based communities, particularly women.

Given their devastating impacts, It is clear that the question of industrial mining and drilling should lie at the crux of the climate change negotiations. Across Latin America, industrial resource extraction is already directly responsible for a number of irreparable damage such as mountaintop removal, high levels of carbon emission, deforestation and vegetation loss, pollution and drying up of water sources, contamination of soil, dust and air.

Despite the palpable threat of climate change in the region, Latin America remains a key geographical area for mining and energy investments. Lured by the prospects of economic growth, national governments are approving a striking amount of mining licenses(1) that menace the regions unique, yet fragile ecosystems. Already, experts predict worsening environmental conditions such as droughts, floods and hurricanes that will increasingly deteriorate the lives and livelihoods of land-based communities.

Over 20.5% of Latin American population is rural and the continent is also home to approximately 40, 000 000 indigenous peoples, who rely on their surrounding natural resources for their livelihoods, physical, psychological and emotional well-being. However, their lives and rights are jeopardised by the expansionist model of mining developments: contamination of water sources, loss of land fertility are already greatly felt by land-based peoples in mining areas, giving a taster of broader climate and environmental aggravations.

The environmental degradation linked to mining and climate change more broadly, does not affect men and women equally. In land-based peoples across Latin America, women work closest to the land and natural resources and play a fundamental role in their communities’ food security; women are the main workers of the land, collect wood for fuel and water for household consumption and agricultural activities.

Women therefore bear an unequal share of social, economic and environmental risks: “It is difficult for us to do our house-chores without water […] the land has dried up and we no longer can plant our crops, we have nothing worth selling in the markets”(2), claims Martha Lugo from the mountainous Ancash region in Peru. Moreover, women are at most risk from the widespread contamination and loss of water, often leading to skin and respiratory diseases in locations where public health services are limited or non-existent.

As extraction-induced environmental degradations strain social dynamics and exacerbates competition over resources, Women’s rights need to be protected and promoted more than ever. Yet, in the present setting where social and cultural discrimination isolate rural and indigenous peoples from decision-making processes about climate and development, women from these communities remain disproportionately vulnerable and exposed to the imminent threat of climate change.

The struggle for environmental justice

Given the above, it is LAMMP’s great concern that despite official discourses aimed at tackling climate change, environmental laws and safeguards fail to be duly implemented. In Ecuador, where the Rights to Nature have been enshrined in its 2008 Constitution, mining investments are still given priority over the protection of a safe and healthy environment.

Starting with the lack of consultations, both government and companies are also undermining rural and indigenous communities’ right to access to clean water and their collective right to development on their own terms. As such, the protection and preservation of our planet has significant political implications across communities in Latin America where socio-environmental conflicts are surging.

In this setting, women, particularly rural and indigenous, are stepping at the front lines of the struggle to demand justice and equity in the stewardship of natural resources and land. Confronted by States, corporations and even from within their own communities, these women activists and defenders are often confronted with sexual abuse, physical and emotional violence, stigmatisation, de-registration of their organisations, threats to their job and legal actions.

Despite this, a culture of impunity surrounds the repression of women human rights defenders and activists, as local and national legal systems often fail to protect them. Throughout 2012 in Meso- America, a key region for mining investments, 40% of women human rights defenders who were victims of rights abuses and violation were engaged in the critical struggles for climate and environmental justice.

As world leaders and business representatives are gathering in Paris for the COP21, LAMMP expresses its following recommendations:

# The safeguard and protection of our planet can only be achieved with an understanding of climate justice, acknowledging the need for just and equitable sovereignty of natural resources, and encompassing equality, human and collective rights, corporate accountability and how each are linked to climate change.

# In view of a binding instrument, promote and strengthen the principles of transparency and accountability via reporting, monitoring and sanction mechanisms

(2) Reaction from the II National Human Rights Congress on “Social Conflicts and Human Rights - A Latin American Panorama” which took place in Lima, Peru between 1st and 4th October 2013.